All major civilizations recognized the importance of light, color and crystals in healing. The Assyrians, Babylonians and Egyptians all practiced therapeutic sunbathing. The Greek city of Heliopolis was renowned for it’s colored windows in temples and light rooms. Different colors and crystals were used for their therapeutic, healing powers during the centuries of different civilizations. In Brazil, the land of crystals and the origin of crystal bed therapy, crystals have been used for many years in all regions of country.

Our crystal beds use Brazilian clear-cut quartz crystals to generate color and light therapy to cleanse, clear and raise the vibration of the chakras(also known as energy centers). The crystals that we use to build our devices are very special and unique and each one of them is hand-cut with unique precision.

The Power of Crystals

Scientists and Engineers have discovered crystals to have some of the highest molecular orderliness found in nature. Full spectrum light that passes through a crystal will resonate with structured patterns such as water, which can take on a variety of molecular patterns. When water forms in well organized, geometrically shaped molecule patterns, it has increased surface tension and bonding properties. This is the pure state of water found in healthy cell tissue, while non-geometric and disorganized water molecules are found in unhealthy cells and cancer cells. The health-giving effects of crystal therapy result from the vibration of the crystals resonating with the water in our cells and tissues, giving a similar effect to energized water as described by Dr. Emoto. 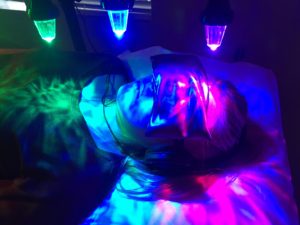 Many people have reported transformational experiences, spiritual direction, emotional blockage clearances, clearer and deeper meditation sessions, physical healing sensations and much more energy and vitality.
One of the more interesting physical transformations constantly talked about amongst those who use the crystal light bed therapy is the Anti Aging effect it has. A youthful glow to the face and skin is very noticeable when the energy field is rejuvenated and the results can be quite visible

Marcel Vogel was the cutting edge engineer from IBM who spent his lifetime investigating quartz crystals. He designed high tech devices to measure crystal vibration output and their effects on physical processes. The experiments of Vogel and his associates proved the following:

A precisely cut quartz crystal produces a constant vibration of the same frequency as water in its purest state.
Moving water will pick up the vibration from the crystal through resonant interaction and this transferred charge will restructure the water.
A cut crystal can be charged with intent to structure water.

Since our bodies are are consist of about 70% water this carries strong implication for how our health can be affected by chromatherapy.

Chakras are the energy centers that exist along your spinal cord, within your auric field. They are also called vortices of light and each chakra has a specific function and color assigned to it. The different colors were assigned to chakras based on the frequency at which they vibrate. Each chakra also relates to a specific set of organs in the body, as well as emotions and psyche.

The Fourth Heart Chakra (Green):
(I Love) Associated with how we love and allow ourself to be loved and to accept love. Parts of the Body: Heart, Circulatory System, Lungs, Chest, Cardiac Plexus. Endocrine Gland:Thymus Gland (controls the immune system).

The Fifth Throat Chakra (Blue):
(I Speak) Associated with how we speak and communicate and speak truth, taking responsibility for our own actions. Parts of the Body: Throat, Neck, Arms, Hands, Brachial or Cervial Plexus. Endocrine Gland: Thyroid Gland.

The Sixth Third Eye Chakra (Indigo):
(I See) Associated with the third eye, our way of seeing and knowing beyond the physical, our connection with the celestial love beyond the physical realm. Location: Central Forehead. Parts of the Body: Carotids, Temples, Forehead.Endocrine Gland: Pituitary Gland.

The Seventh Crown Chakra (Violet):
(I Know) Associated with the higher mind and integration of the physical and spiritual. Parts of the Body: The Brain, the Nervous System.Endocrine Gland: Pineal Gland.