Marcel Joseph Vogel (1917-1991) was a celebrated research scientist working at IBM Advanced Systems Development for over 27 years. Dr. Vogel was awarded an honorary doctorate for his numerous scientific innovations, inventions, and brilliant papers based on his study. Marcel Vogel researched luminescence with prolific results, and was highly lauded at IBM. This research eventually led him to publish his celebrated cutting-edge thesis, “Luminescence in Liquids and Solids and Their Practical Application”, in collaboration with Chicago University’s Dr. Peter Pringsheim.

Marcel Vogel received over 67 patents for his inventions, among which was the magnetic coating for computer hard disk drive systems still in use. His areas of expertise, besides luminescence, were phosphor technology, magnetics and liquid crystal systems. He also designed the Vogel crystal, which focuses “universal life force” by concentrating it to a higher level. Vogel crystals are cut to the exact angle of 51 degrees, 51 minutes, and 51 seconds, the exact angle of the Great Pyramid of Giza.

Marcel Vogel’s crystal is designed after the geometry of the Tree of Life symbol. Its design (per Dr. Vogel) was shown to him in a series of lucid dreams. He conducted numerous studies of the crystal and stated it to operate with coherent light and energy. The last years of his life were dedicated to healing with the Crystals, which he believed to amplify theta brainwave thought, and could be used for healing and manifestation of ‘noble intent’. 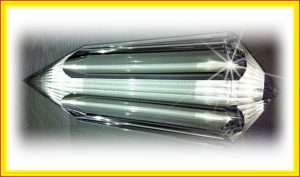 Indeed Marcel Vogel provided an extraordinarily advanced technology to the Earth. He was a master scientist of such technology within the benevolent scientist-priest of Atlantis. Those of you that work with crystals ( especially Marcel Vogel Crystals) will be able to sense a great and greater leap within their energy resonance. Utilization of the crystal into thought amplification will remarkably increase the energy. Ascension is defined as the crystalline vibrational transition of the planet, and as such all that is crystalline is enhanced, amplified exponentially. Because StellarWaves crystals synergize ‘crystalline (theta brainwave) thought’ with coherent crystalline light, a unique coherent frequencial meld is formed and amplified. That amplification charges the ability of focal intent into manifestation.